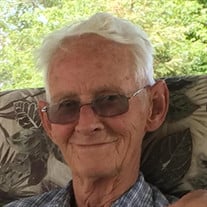 Mr. Aldon R. “Don” Adcox departed this life on Wednesday, May 12, 2021 at the age of 78. He was born October 22, 1942 in Amagon, the son of William Aldon and Elizabeth “Lizzie” Roussell Adcox. Mr. Adcox was married to Miss Janice Caril (Keen) Adcox on June 17, 1961, and together they spent the next 59 years raising their family. He retired from General Motors in February 1993. Following his retirement, Mr. Adcox enjoyed woodworking, hunting and fishing. He was capable of anything, and could always be counted on to help with a project. Mr. Adcox loved antiquing and refinishing antiques, and spending time with his family. He doted on Janice, and would do anything she ever asked of him. He was preceded in death by one son, Aldon Raymond Adcox; one grandson, Tyson Adcox; his stepmother, Ila Adcox; and his parents. Mr. Adcox is survived by his wife of 59 years, Janice Adcox of the home; two sons, Michael James Adcox of Perryville, Missouri, and Douglas Bryant Adcox of Perryville, Missouri; one daughter, Donna Kay Adcox (Jeff Jefferson) of St. Charles, Missouri; two brothers, Robert Adcox of Annapolis, Missouri, and Darrell Adcox of Pennington, Arkansas; two sisters, Dorothy Ford of Heber Springs, and Regina Lopinot of Arnold, Missouri; three grandchildren, Kyle Renner, Dalton Adcox, and Destiny Caine; five great-grandchildren, Ireland, Leium, Riley, Scarlett, and Zaivean; several nieces and nephews, and a lifetime of friends. Friends may visit at the funeral home, Saturday, May 15, beginning at 10:00 a.m. Funeral services will follow at Jackson’s Newport Funeral Home Chapel at 11:00 a.m. with Bro. Vance Penn officiating. Interment will be at Pennington Cemetery. Those honored to serve as pallbearers are Roger Leonard, Cody Mann, Tyler Mann, Daryn Mann, Dennis Mann, and Chase Prince. Arrangements by Jackson’s Newport Funeral Home. www.jacksonsfh.com

The family of Aldon "Don" R. Adcox created this Life Tributes page to make it easy to share your memories.

Send flowers to the Adcox family.