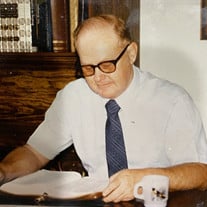 Albert “Bert” Joseph Brewer, 91, of Perryville, Missouri, passed away on September 1st, 2021 at the home of his son in Perryville. A memorial service will be held at 12:00pm on the occasion of his 92nd birthday, October 2, 2021, in the open-air pavilion at Saline Baptist Church in Minnith, MO. Military Graveside Honors will be provided by American Legion Post 133 and U.S. Navy Honors Team. The family would be honored by your presence. Bert was born in the family home on Jackson Street in Perryville to Edward Louis Brewer and Stella Ann (Bass) Brewer on October 2, 1929. He was a child of the Great Depression and his first job at 6 years old was as a bowling alley pin-setter. He often regaled family and friends with stories of camping and fishing in the Perry County of his youth where he attained the rank of Life Scout in the BSA. Thanks to his big smile, sense of humor and quiet demeanor, his friends often called him Smiley. He graduated from St. Vincent’s High School in 1947 and later earned a bachelor’s degree in Business from Southeast Missouri State University in 1957. He proudly served his country in the U.S. Navy aboard destroyer USS Buck during the Korean War from 1948 until 1951. After his return home, he married the love of his life, Helen Joyce Coffman, on December 26, 1953 at St. Mary’s of the Barrens Church in Perryville. They were happily married for 61 years until her death in 2015. After moving to Texas with his young family in 1962, he worked in retail management at Ward’s Cut Rate Drugs and Skillern’s Drug Company. During the 70’s, he enjoyed a career in residential real estate, eventually opening a family brokerage named Brewer Realty in Dallas. Bert and Helen returned to Perryville in 1981 where Bert enjoyed semi-retirement, filling his days with fishing (his fish fries are legendary), traveling, reading, playing bridge and reading his Bible. In 1967, Mr. Brewer committed his life to Jesus Christ at Orchard Hills Baptist Church in Garland, TX under the ministry of Pastor Dickson Rial. He served as a deacon for more than 45 years, most recently at Trinity Baptist Church in St. Mary, MO. He taught Men’s Sunday School for much of his adult life and had the privilege of leading several men to a personal faith in Jesus Christ. As a true elder of the faith, his character was above reproach. His disposition was gentle, kind, and self-controlled. He was respectable, hospitable, and generous. 1Tim 3:2-4 Albert was preceded in death by his wife, Helen, his parents Edward L. Brewer and Stella Ann Brewer and three siblings: Louis E. Brewer, Maura Adair and Dorothy Ann Uding. During his life, he also lost brothers-in-law Chuck Adair, Phillip Elliott, Thomas and Eugene ‘Toot’ Coffman and sisters-in-law Georgia, Rita, Judith Ann Brewer and Wilma Coffman. He also lost precious nieces and nephews, Jerry and Joyce Ann Coffman and Robin Adair. Also predeceasing him were great-nieces and nephews Robbie Uding, Connie Roth Lang and Patrick Coffman. Bert is survived by two sons, Stephen Paul married to Dana (Thompson) Brewer of St. Louis, Mo.; Mark David married to Cynthia (Williams) Brewer of Perryville, Mo; and one daughter, Susan Louise (Brewer) Hammond married to Steve Hammond of St. Louis, Mo. He is also survived by Brother, Dennis C. Brewer of Perryville, Mo.; Sister Victoria Elliott of Metropolis, IL., Sister - Sr. Helen Brewer of St. Louis, Mo.; as well as by 7 grandchildren: Matthew Brewer, Philip Brewer, Alyssa Moses, Nicholas Brewer, Jeff Hammond, Amanda Christensen and Mike Mulhall, 10 great grandchildren and 3 great-great grandchildren as well as many nieces and nephews. Eternal gratitude to Mark and Cindy Brewer, who have faithfully and sacrificially cared for Bert in their home since 2019. Their steadfast faithfulness embodies Bert’s favorite verse in the New Testament: Hebrews 13:8 “Jesus Christ is the same yesterday and today and forever.” Special thanks to Ford & Young Funeral Home. Memorials are preferred to American Bible Society or Minnith Cemetery Association.

The family of Albert Joseph Brewer created this Life Tributes page to make it easy to share your memories.

Send flowers to the Brewer family.