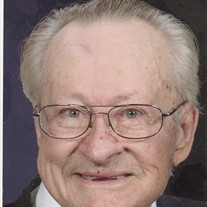 Albert Boettcher Jr., 91, of Altenburg, Missouri died Sunday, July 7, 2019 at his home. He was born August 1, 1927 in Janesville, MN to Albert and Rosa (Schultz) Boettcher. He and Heidi Schulz-Netzer were married May 18, 1963 in Altenburg. She preceded him in death October 7, 2016. "Junior" as he was known to friends and family, was born in Minnesota but his family moved to Altenburg when he was an infant. He enjoyed Midwest farm life in the 30s and 40s he followed the wheat harvest west to Montana. It was an experience he remembered and talked about for the rest of his life. In 1951, he was drafted into the Army. Since he was the youngest son, his mother Rosa was able to bring him home after a year under a hardship clause. His three surviving brothers at the time had all been drafted into the Army as well, two of them serving in the front lines. The West had captured his attention, and although he was happy to come home to the farm, he enjoyed his Army days at Camp Carson, CO. He loved the area so much that he honeymooned there with Heidi in 1963. During the 1950s he spent his time farming and working various jobs of that nature. In 1959 he found a job opportunity that would keep him self-employed for the next 50 years. He learned to artificially inseminate cattle. He traveled to farms in the surrounding area to service small dairy and beef herds. He was still visiting one or two farms occasionally until a stroke in 2013 left him unable to drive. He was an active member of Concordia Lutheran Church in Frohna, serving as elder over the years, singing in the choir for most of his life and making pork chops for the annual church picnic. He had the entire collection of Louis L'Amour novels and when he could no longer see well enough to read, he listened as narrators brought to life the stories of his beloved Western lands. He is survived by eleven children: nine daughters, Barbara (Gary) Bierman of Chester, IL, Deborah (Gary) Brees of Jacob, IL, Jo (David) Rhodes of Jackson, MO, Elizabeth (Brad) Moore of Huntersville, NC, Maria Bartoe of Old Appleton, MO, Rebecca Boettcher of Alaska, Ruth Kennedy of McCall, Idaho, Sara (Phillip) Wallace of Wappappello, MO, and Stephanie Boettcher of Altenburg, MO; two sons, Timothy (Kari) Boettcher of Altenburg, MO and Andrew Boettcher of Altenburg, MO; twenty seven grandchildren and eight great-grandchildren. He was preceded in death by his parents, two sisters: Gertrude Stoffregen, Luella Sigrist; five brothers: Cornelius Boettcher, Hugo Boettcher, Gerhardt (infant) Boettcher, Ludolph (age 9) Boettcher and Paul Boettcher; one grandson, Matthew Bierman. Visitation will be from 4:00 PM to 8:00 PM on Friday, July 12, 2019 at Concordia Lutheran Church in Frohna and on Saturday from 6:30 AM until time of Service at 10:00 AM. Service will be at 10:00 AM Saturday, July 13, 2019 at Concordia Lutheran Church in Frohna with the Rev. Steven Theiss officiating. Burial will be at Concordia Lutheran Cemetery in Frohna with military honors provided by American Legion & Delta Team. Memorial contributions may be given to Concordia Lutheran Church, Kindred Hospice and KFUO radio. Online condolences may be made at www.fordandyoungfuneralhome.com. Ford & Young Funeral Home is in charge of arrangements.

Albert Boettcher Jr., 91, of Altenburg, Missouri died Sunday, July 7, 2019 at his home. He was born August 1, 1927 in Janesville, MN to Albert and Rosa (Schultz) Boettcher. He and Heidi Schulz-Netzer were married May 18, 1963 in Altenburg.... View Obituary & Service Information

The family of Albert Boettcher Jr. created this Life Tributes page to make it easy to share your memories.